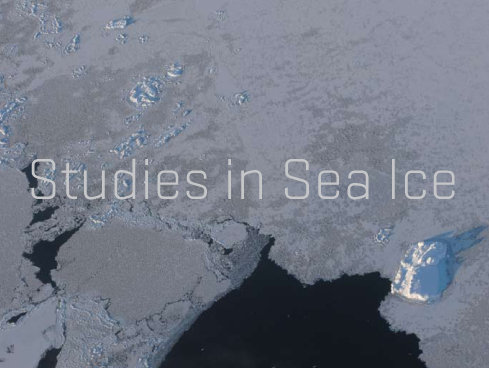 Focusing her camera on the extraordinarily complex and dynamic qualities of the frozen ocean, Studies in Sea Ice by Roberta Holden is a work of colour archival prints taken by helicopter between the communities of Ummanaq and Nuussuaq on the northwest coast of Greenland – a region that has undergone a dramatic warming trend over the past ten years – as part of her Artist in Residency at the Upernavik Museum in Upernavik, Greenland in March 2009.

A continuation of a project begun in 2007 as an Official Artist of the International Polar Year, Studies in Sea Ice approaches the themes of Roberta’s past polar work from a new vantage point, speaking more directly, more urgently, to the essential vulnerability of the planet. Disorientating in its lack of scale (the vast tracts of sea ice could easily be mistaken for the microscopic, emphasizing the multiple layers of our spatial engagement), these abstract images reveal both the power and fragility of the frozen world. The cracking and buckling of sea ice suggest, also, a metaphorical fracturing and compression, a tearing of the fabric of the planetary ecosystem, a rupturing of our symbiotic relationship with nature under intense human-induced pressures.

Items in Your Cart

Your cart is empty